From the same cloth as temple run , Omega run is a comic based marvel which is a war of heroes.

Story of brave Grayson, a high school football player in Port Avarice, was often regarded as ‘the backbone of the team’; a sad choice of words, for later on in his football career, he took a nasty tackle for his team. This injured his spine immensely. Worried he wouldn't make it back on the field, or out of the hospital for that matter, he searched for a cure. His only option was to try a new and dangerous procedure; he would wear an electric powered suit. Stronger than ever before, Grayson became the adored hero, Omega. However, things went awry when Xander, a deranged scientist recreated the suit’s technology. Determined to use the technology to enhance himself, Xander attempted to apply the technology similarly. But something in the process went awfully wrong, scarring him in the process. He had 2 options in front of him either to cave in or take it out on the world. He resorted to the life of a criminal whose power could only be matched by brave Omega. Now, with the help of Kreiger, his jetpack-wearing sidekick, brave Omega takes on Xander. Better than the temple run or any of its versions.It would be safe to say that big games like Temple Run , Temple Run : Brave , Temple Run : OZ , Angry Gran Run and Mega Run pale in front of Omega Run.

Omega runs through a futuristic world with temples of hurdles and pitfalls in order to escape from Xander.
Omega Run has three easy controls (jump, slide, and get a ride from Kreiger). They are useful for when Omega encounters obstacles just like in temple run. But these Small hurdles, such as crates and boxes can be easily cleared with the jump button. Overhead obstacles are also quite easily avoided with the sliding button. However, when it comes to huge oil spills, you must resort to grabbing hold of Krieger riding above you. Kreiger can be controlled by tilting your device left and right. Learning to keep coordination between Omega and Kreiger is difficult, but it is the key to going far in the game. Along the way, Omega and Kreiger will encounter many power ups, like shields and speed, and scientist can pick them up. Another rewarding feature is the store. Omega obtains many gems during a run, and you can spend them on helpful upgrades that make power-ups more effective. From the makers of Angry Temple Gorilla and Mega Running we now present Omega Run. 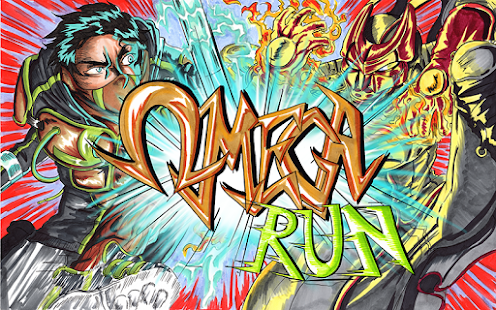 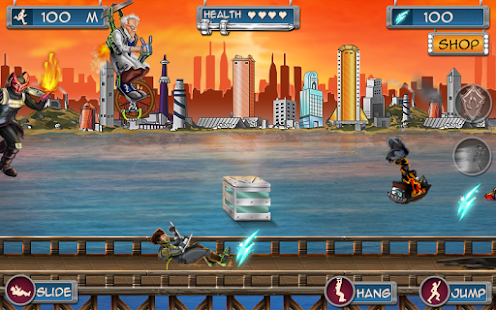