With nearly 50,000 downloads and more that 200+1s in its first run, this is the best temple killing game!

The story of the Brave Temple Gorilla revolves around Coco Jingo, a brave gorilla. Jingo is the avenger who spends all day just eating heavenly coconuts of the abandoned Holy Coconut Temple in the dense tropical jungle of Bongo Land. His possessiveness and insatiable love for the coconuts has made him quite sensitive to the territory. Things seem to be going fine when one day the animals and bugs of the jungle make up their mind to invade the temple and get their hands on the scrumptious fruits of the ruins. They were all geared to carry out the invasion, forgetting one major point – Jingo isn’t a happy gorilla! And he is not afraid of anyone either. He’s one brave temple guardian!

Prepared to give the intruders a tough time, Jingo becomes a fruit ninja and makes full use of the coconuts that he has in his temple. It is time to feel the anger of the brave ape as he squeezes and whooshes the invaders aside. Now play the role of Jingo, the avenger and help him give the animals and bugs a tough time. There will be challenges… lots of them! Starting slow and steady to make you understand the game play, you will need more stringent timing as the game progresses. The brave gorilla will have to be at his best to ensure his temple stays clear from any harms. Be part of an exciting gaming experience and enjoy the sounds as the coconuts hit the intruders.
There are different animals and insects that Jingo has to hit. This includes the ferocious alligators, not the nice ones you see in “Where’s my water? 2”, misleading turtles of TMNT, bugs and birds . The big fish are the bugs and birds and if you manage to hit them, you get awesome bonus points. Watch as the coconut squishes the bugs and alligators! The trickiest of all are the lizards that are poisonous. You need to jump over these, as nimbly as the avengers would, since coconuts can’t be thrown at them. Failing to do so will cost you a life, so beware!
Just like Temple Run, you will instantly enjoy the fast paced Brave Temple Gorilla. However, if you want to play a slow paced game like angry birds, you may not like the adventurous, action packed Temple Gorilla. You can even blast bombs to kill all the birds. Its action will keep you riveted just like the Star Wars II 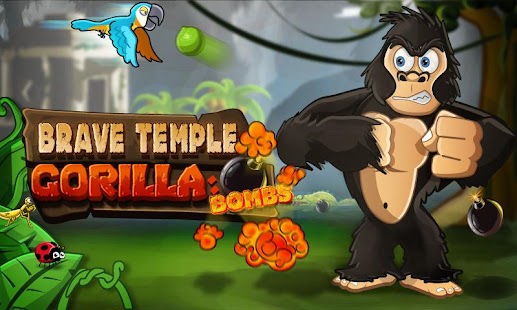 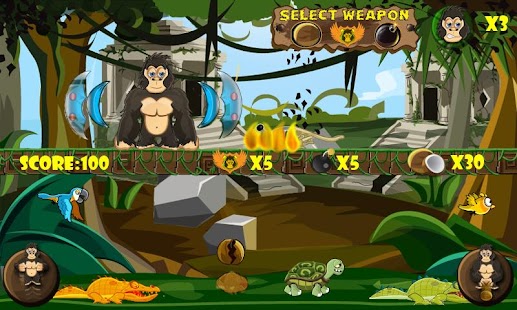